Asbestos in Vermiculite...What EPA can't (or won't tell you)
The concern with vermiculite asbestos used in construction in the 1950s through the 1980s is a relatively recent, being discovered approximately 25 years ago. The basic problem with vermiculite asbestos (tremolite and actinolite) is that it is different than the types of asbestos that has been regulated since the 1970s. Existing regulations pertain to three other types of asbestos that, if present in a concentration of >1%, are regulated as an asbestos-containing material. However, tremolite and actinolite are more dangerous forms of asbestos. Further complicating matters is the possibility suggested by some studies that the tremolite and actinolite asbestos is only an “indicator contaminant” and that the health risk is associated with or increased with several co-existing non-asbestos and quasi-asbestos minerals including winchite, reibeckite and/or richterite (“quasi-asbestiforms”).
Recommendations
Guidance for best practices for homeowners can be found at http://www.epa.gov/asbestos/pubs/verm.html. It is generally recommended that the vermiculite insulation be appropriately covered and left in place undisturbed. Removal is generally unnecessary unless required for renovation or demolition. Since vermiculite asbestos is often unregulated, opinions vary regarding proper safeguards and controls for homeowners and contractors working in attics. I am currently in discussions with installers to develop an understanding of their concerns and appropriate controls to allow the safe installation of additional insulation.
Many attic insulation installers are understandably concerned about working around vermiculite asbestos. Many simply refuse to work in an attic where vermiculite asbestos is present, regardless of whether it is present in a regulated concentration. However, there is no reason that additional attic insulation cannot be installed over asbestos vermiculite with an unregulated concentration of <1% as long as some appropriate precautions are followed, especially since the asbestos present is often in the fine settled fraction rather than the coarse fraction of insulation at the surface. The lack of formal regulation gives you the opportunity for creative and flexible site-specific safety controls. Tri-Tech can provide asbestos training for installers and other contractors.
The following is the professional recommendation of Tri-Tech pertaining to vermiculite asbestos insulation:
The mere presence of vermiculite insulation in an attic is not believed to present an unreasonable health risk. It is generally understood that the asbestos is generally settled in the finer insulation near the bottom. Incidental contact with the coarser surface insulation does not necessarily cause an unsafe exposure. Additional surface sampling can be conducted to assess whether any asbestos is present near the surface layer of the insulation that could be affected by attic installations.
If you are acquiring a home with vermiculite asbestos insulation, an appropriate devaluation of the building should be recognized due to the potential for a release in the event of catastrophic incident (e.g. roof collapse) and the potential abatement cost for removal prior to a major renovation such as a building addition or for future demolition, particularly if vermiculite asbestos becomes regulated at some time in the future at a level <1%. In the event of ceiling leakage of insulation, such as may occur during ceiling fan installation, the insulation/dust should be cleaned using wet wiping and wastes disposed of in a sealed plastic bag. A homeowner should not be unduly alarmed from a one-time exposure event.
There is understandable concern about the safety of the air in the attic from the historical vermiculite installation process. If the insulation was poured in a manner that released large amounts of asbestos fiber, residual asbestos fibers could remain in the dust and air. Tri-Tech can perform additional dust and air sampling to satisfy these concerns. These results can be applied to the existing EPA standards for dust and air. However, it may be prudent to apply a tenfold reduction in the standards to accommodate the additional risk factor from the more hazardous form of asbestos in vermiculite. Surface testing of the specific areas to be disturbed can also be performed to differentiate surface concentrations from the amounts safely buried near the bottom of the insulation layer.
Obviously, additional vermiculite asbestos controls and testing adds to the costs and lengthens the return on your investment. A successful, safe and cost effective attic insulation project will require good communication and coordination between the homeowner, the installing contractor and an asbestos building hygienist.  Need an asbestos air test or inspection following work involving VAI? Tri-Tech can do baseline or clearance air testing.
Learn more about Do-It-Yourself testing options for asbestos.
Learn more about Do-It-Yourself sampling of vermiculite for asbestos. 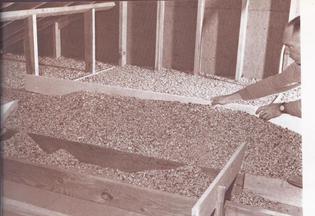 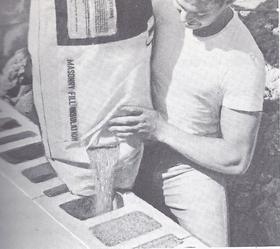 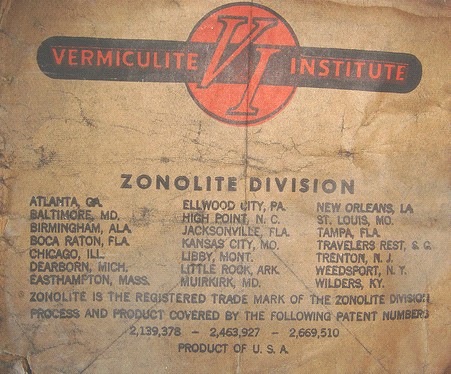 Photocredit: Asbestorama
Leveling of poured vermiculite attic insulation shown in a 1976 builder's manual.
Vermiculite asbestos insulation also sometimes occurs within exterior block walls (more common) or within interior walls (less common)
The type(s) of asbestos and quasi-asbestiforms found in vermiculite are trace contaminants that are somewhat different from other types of asbestos. Because these types of asbestos were uncommon and not well studied when asbestos regulation came out, these minerals were not regulated any differently that the more common forms of asbestos. However, during investigation and cleanup of vermiculite mine in Libby, Montana, it was discovered that this type of asbestos often occurs at unregulated concentrations (0.1-1%) in vermiculite. However, some have estimated that toxicology data indicate this form of asbestos is about 10 times more dangerous. Therefore, many have suggested EPA should regulate this type of asbestos over 0.1%. However, testing methods are too inexpensive and imprecise to be approved for providing legally defensible data. Litigation and insufficient studies of health risks regarding the vermiculite has complicated things.
Assessment of vermiculite asbestos insulation (VAI) poses a number of problems compared to typical asbestos-containing materials. These problems are summarized as follows:
•

The type of asbestos (and quasi-asbestos) present in vermiculite is believed to be much more dangerous than the most common forms of asbestos.
•

Health standards for these types of asbestos have not been established.
•

Studies have indicated that other vermiculite mines besides the one in Libby Montana may have produced insulation containing quasi-asbestiform or non-asbestos fibers. These fibers, including winchite, reibeckite and/or richterite are not regulated but are believed to pose a risk similar or greater to asbestos.
• Research of the health risk of vermiculite asbestos is ongoing. There are some indications that the risk of co-existing non-asbestos or quasi-asbestos fibers that occurs with the vermiculite asbestos poses a greater risk or amplifies the risk of the asbestos fiber exposure.
​
•     Depending on the processing methods and grades of insulation, the insulation may contain large bundles of asbestos but fewer unbound fibers, which can skew the concentration and perceived health risk.
•     Sometimes the asbestos fiber may be bound within the mica plates rather than be present as a loose fiber. The detection of bound and loose fibers varies by analytical method. Grades of vermiculite with bound fibers pose a much lower risk than grades with unbound fibers.
The methods required to accurately characterize the type and concentration of asbestos and non-asbestos/quasi-asbestos fibers are cost-prohibitive for many residential applications.
​Because of these circumstances, Tri-Tech provides basic testing services to provide a determination of whether vermiculite insulation is legally regulated as asbestos. However, additional methods to evaluate the health risk of vermiculite are more costly and are not yet offered. Tri-Tech will be offering these additional laboratory test methods if analytical costs sufficiently decrease and there is sufficient demand. See Tri-Tech's DIY Testing Page for a low cost testing option.
A recent study of published in the Journal of Environmental Health (Oct. 2012) of 40 homes attempted to quantify the extent of “passive” living space contamination from asbestos due to VAI and other sources of asbestos in the home where there was no known problem. In this study, only 0.6% failed the air quality health standard and only 3% failed the settled dust health standard for asbestos. However, each of these failing results was attributed to another form of asbestos in the house rather than from the VAI. A detectable level of VAI-related asbestos was identified in 26% of the homes studied but in all instances the concentrations were well below the applicable health standard.
In addition, due to a recent legal settlement, homeowners may be eligible for partial reimbursement of abatement costs if the VAI can be fingerprinted and traced a certain manufacturer of VAI.
But there is some good news...
About those installers...
In Conclusion...
Due to the difficulty in assessing bulk samples, it is expected that future assessment will focus on testing asbestos in air samples to determine the relative health concern. There is much less difficulty in measuring asbestos and quasi-asbestos fibers in the air.

Do-it-yourself sample testing starts at only $85!