Health Effects from Mold
The allergenic and asthmatic effects of mold spores are well established. It is also well known that the susceptibility to mold varies widely among individuals. Allergic affects are expected to comprise the large majority of effects on healthy individuals.These include common cold-like symptoms that persist beyond the duration of a common cold.
People with compromised immune systems or other severe health problems are more susceptible to the other health impacts from mold, which we will consider further below. Certain drugs such as steroids have immunosuppressive effects, such as may be prescribed for back problems, so we shouldn’t limit our concern of mold infection or other diseases to visibly frail or the chronically ill.
Common Allergy Symptoms
Watery or itchy eyes
Excessive sneezing
Stuffy or running nose
Nose and throat irritation
Cough and post-nasal drip
Dry, scaly skin
Long-Term Effects of Mold
Mold toxins (Mycotoxins) are known or suspected carcinogens and endocrine disruptors. Learn more about long-term health effects with few or little symptoms that be would commonly attributed to mold on the Mycotoxin Testing page.
Infectious Health Impacts from Mold
One of most common infectious health impacts from mold is Chronic Rhinosinusitis (CRS), more commonly called “sinusitis.” It was estimated in 2006 that approximately 14% of the US population suffers from chronic sinus problems. This can include various respiratory symptoms including constant cold-like symptoms, pain and tenderness of the face, fatigue and ear pain. Infections can result in growths within the sinuses.(1) One study indicated culturable fungi recovered in 64% of cases but due to the ubiquitousness of viable mold spores, it was estimated fungi alone was only identified as the primary cause in 5-10% of infection cases.(2)
Fungal respiratory infections are far more likely to occur in asthmatics or persons with lung disease such as cystic fibrosis. It is estimated that 0.25-0.8% of asthmatic children suffer from Aspergillosis, one of the most prevalent of these diseases.(3)
Infectious health impacts from mold remain far more significant in occupational settings, where exposures are typically higher than in residential settings.
Controversies Regarding Mycotoxin Health Impacts
References
1.

Chronic Illness Associated With Mold and Mycotoxins: Is Naso-Sinus Fungal Biofilm the Culprit? National Institute of Health, 2013.
2. Further Evidence for Allergic Pathophysiology in Allergic Fungal Sinusitis. Laryngoscope, 1998.
3. Toxic Effects of Indoor Molds, Official Journal of the American Academy of Pediatrics, 1998.
4. Spectrum of Noninfectious Health Effects From Molds, Official Journal of The American Academy of Pediatrics, 2006.
5. Detection of Mycotoxins in Patients With Chronic Fatigue Syndrome, Toxins (Basel/Switzerland), 2013.
6. Neurologic and Neuropsychiatric Syndrome Features of Mold and Mycotoxin Exposure, Toxicology and Industrial Health, 2009.
7. Exposure Assessment to Mycotoxins in Gluten-Free Diet for Celiac Patients, Food and Chemical Toxicology, 2014.
8. Fusarium Spp. and Storage Fungi in Suboptimally Stored Wheat: Mycotoxins and Influence on Wheat Gluten Proteins, Mycotoxin Research, 2003.
Non-Infectious or Sub-Clinical Infection Health Impacts
Hypersensitivity pneumonitis is a respiratory disease in which the repeated inhalation of certain antigens provokes a hypersensitivity reaction. Most commonly the causative agents include animal proteins and certain chemicals (e.g. diisocyanates). A majority of disease occurrences are occupational (e.g. food workers). One study of 86 child patients attributed 17% to mold. Genetics plays an important role in determining susceptibility to the development of hypersensitivity pneumonitis, because only a small proportion of exposed persons is affected. Studies have linked susceptibility to a certain gene. The most common fungal agents associated with hypersensitivity pneumonitis in children include Cladosporium, Epicoccum, Penicillium, and Stachybotrys spp.(4)
Mold exposure has also been linked by some with Chronic Fatigue Syndrome, fibromyalgia, hypothyroidism and various other hormonal disorders, neurological disorders (tremors, vertigo, extreme sound and light sensitivity etc.) and even dementia and Alzheimer’s Disease. One study showed that 92% of a group of 112 patients with fibromyalgia and chronic fatigue syndrome that resisted conventional treatment tested positive in a urine test for mycotoxins.(11) These assertions remain controversial and many of the doctors involved in these studies have been linked to “alternative medicines” and publish studies in lesser known publications that do not require stringent peer review. Some authorities claim that mycotoxin exposures may mimic the symptoms of other diseases or accelerate but not cause these largely unexplained medical conditions.(6)
The toxic effects from ingestion are well understood (e.g. eating mold peanuts) due to numerous case studies and controlled studies of animals ingesting mold-impacted foods as well as case of studies of human poisonings. Research suggests that mycotoxins are in part attributable to people who experience dietary problems to gluten. The hypothesis is that the wheat and other grain products associated with gluten contains various mold toxins. (7,8)
Toxic effects from mycotoxins from inhalation due to building exposures remain more difficult to quantify. One of the leading and fully independent experts in the field, Dr. Harriet Burge of Eurofins EMLab, claims that there is no scientific evidence proving health impacts from mold metabolites (excluding unusual agricultural and occupational circumstances that don’t apply to people in moldy homes). However, it is understood that as with other various air quality contaminants, mold toxins in air could be additive or even synergistic. More research of this is needed!
Persistent Mold Toxin Biofilms
In some respiratory infections, a “symbiotic” fungal-bacterial biofilm develops. This film helps protects the infecting fungal cells from the immune system response. This helps possibly explain the chronic persistence of fungal infection well after the mold problem has been corrected and the mold exposure eliminated. This embedded fungal colony serves as a source for the production of mycotoxins. However, diagnosis of this condition is difficult because cultured swabs will produce fungal species growth in both infected patients and normal healthy individuals due to the common presence of mold spores in the air, which routinely come in contact with or sinuses and lungs. In addition, medical sampling techniques may not necessarily penetrate the biofilm to recover the infecting mold. As described on the Mycotoxin testing page, one nasal washing method have some success in demonstrating the difference in results between infected patients and healthy persons used as controls. 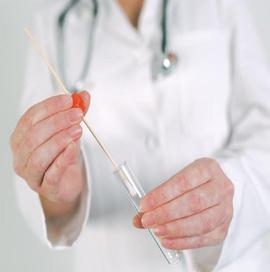 Medical testing for molds is complicated by the prevalence of mold in air as part of normal background conditions
Source: Mayo Clinic
Tri-Tech had an article on the non-allergenic effects of mold published in the Michigan Association of Environmental Professionals Quarterly newsletter (Summer, July 2020). You can dowload the whitepaper Mold Toxins and Infections article.