More About Lead Exposures from Non-Paint Sources
Lead Absorption in Vegetable Gardens
Lead is generally heavy, insoluble and adsorbed by humus and clay, causing it to accumulate in the upper 4 inches of soil. High levels of humic and fulvic acids from decaying leaf litter can cause lead to be solubilized and mobilized. Less lead is generally absorbed by garden plants in higher pH soils (less acidic/more alkaline). Lead tends to accumulate in the surface layer of soil and as a result, shallow rooted plants will absorb more lead than deeper rooted plants.
Generally speaking the roots will contain the most lead and the flowers and fruits the least amount of lead. Studies have found that a few vegetables such as leaf lettuce and white icicle radishes can absorb atmospheric lead deposited on leaves and translocate it to the roots, a possible concern where airborne lead levels may be present such as near industrial pollution sources or highways. Generally speaking, root vegetables, dark green leafies and herbs bioaccumulate lead more than other vegetables. Sunflowers and some hay/forage crops also efficiently bioaccumulate lead. Lead appears to affect the yields of leafy vegetables and corn more than root vegetables, however. 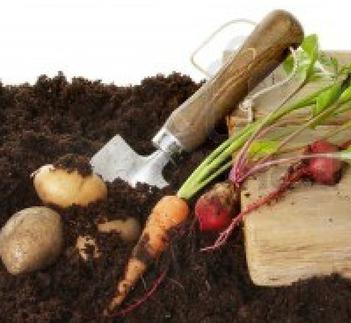 Food and Dietary Considerations
Studies have shown that high corn oil and low mineral diets increase the lead absorption in food synergistically. High levels of copper appear to increase lead toxicity. Garlic, Vitamin C, calcium, magnesium, iron, phosphorus and zinc in the diet appears to decrease lead absorption.
The Michigan Department of Public Health, concerned that lead may be a risk to sports anglers who typically eat greater amounts of locally caught fish from the Great Lakes, tested blood and found that the anglers had more than 40% greater lead concentrations than people who did not regularly eat locally caught fish. Unlike fish, lead does not appear to biomagnify in animal flesh although there is a risk of lead consumption in wildgame from lead shot. Wild fowl meat may be contaminated with lead due to the inadvertent ingestion of lead shot or sinkers for gizzard grit.
Since lead accumulates in animal bone, there are a few reports of lead-poisoning associated with bone meal food additives.
Neglected Housekeeping
Studies have shown that the lead levels of outdoor soils correlates with the lead levels of dust indoors. See the attached map for locations of old lead smelters and other potential sources of lead identified in the City of Detroit.
Studies have shown that levels of lead in vegetables can be correlated with the proximity of old lead smelters and expressways

Tri-Tech_ambient_lead_source_map.pdf
Leaded Dishware
Lead-glazes have been used on various types of pottery, china and earthenware. When the dishware is properly fired in a high-temperature kiln, the lead becomes fixed and typically will not leach or scale from the surface. However, if the item was not fired properly by the maker or the surface is etched or worn from physical (e.g. dishwasher soap abrasive) or chemical forces (acidic foods), lead could be released on to hands or into food. Lead glass crystal poses a similar but somewhat lower risk.
Leaded Bathtubs
One study showed that 25% of porcelain-glazed steel tubs and 77% of porcelain-glazed cast iron tubs had a leaded glaze. Tubs made as recently as 15 to 20 years ago may contain lead. Again, an intact finish probably poses no risk. However, if you see chalking or wear...be wary!
Miscellaneous Collectable/Nostalgic Household Items
A study by the University of California Berkley identified a number of leaded items being sold at a thrift store. Among the items that contained high levels of lead were a salt shaker lid, small red toy teapot, a Garfield cup, a red casserole dish, a potato ricer, an ice cream scoop, a Japanese wine cup, a Pewter bowl, and a turtle necklace.
Leaded Vinyl Inflatables
So-called inflatable “Bounce-houses” and similar structures often rented for parties have occasionally tested positive due to being made with lead-stabilized vinyl imported from China. Before renting for a childrens' party, consider asking the vendor for certification that the structure is lead-safe. 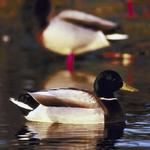 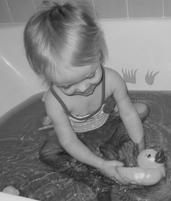 Is Your Garden Soil
Lead-Safe?

Historically, treated sewage sludge amendments have been used on gardens that contains an elevated level of lead (some reports suggest 100-200 ppm). However, studies have indicated that lead is not as readily absorbed from sewage amendment, possibly due to the binding action of lead to organic matter. However, concern remains when the organic material is consumed by degradation over time that lead would become more available for plant absorption.
The recommended lead level for vegetable garden soil is 100 ppm. For comparison, background levels of lead in soil range from 5-45 ppm in undisturbed soils and 20-80 ppm in developed/urban environments. Plants naturally uptake small quantities of lead. The daily dietary intake of lead from a normal diet has been estimated at 0.06-0.3 mg per day, with 0.4 mg per day cited by some sources as the maximum safe level for adults. The safe level for a child is projected to be 0.2 to 0.3 mg/day. The safe level for a baby is still subject to much debate!
Learn more about lead in drinking water and the various testing methods.
Got a sample of something you would like tested for lead? Tri-Tech can help. Go to the DIY sample testing page.
Tri-Tech can also perform soil screening for multiple heavy metals. Learn more on the heavy metals page.